On a Tuesday morning Ramble in late September, twenty Avon Trail hikers enjoyed a tour of the Wildwood Dam. Our host, Vanni Azzano, supervisor of Community Education for the Upper Thames River Conservation Authority (UTRCA), provided an overview of the water management features of the dam. “This tour program is new and yours is the 2nd group to take it,” Vanni explained.

From the storyboard display and video in the Wildwood Conservation Area main building, we learned how the Trout Creek watershed is a small but important portion of the overall Upper Thames River watershed. Flood risks have always been a concern for St. Marys, the town downstream of the dam at the junction of the Trout Creek and Thames River.

The Wildwood dam was constructed by  the province in 1963. This drawdown dam provides flood protection for St. Marys as well as base flow to Trout Creek during the summer months.  Floodwater flow levels along Trout Creek can be reduced from 20 to 95% depending on the severity of the flood and when it occurs. The dam works together with other flood control structures. For example, in St. Marys, a 500-meter-long floodwall constructed in 1990 at the junction of Trout Creek and the Thames River helps protect the downtown from flooding.

In the early 1960s, over 40 landowners were forced to sell their farmland, so the province could create the present-day Wildwood Reservoir.  We have these landowners to thank for the Wildwood Conservation Area’s trails (25km), recreational camping, boating and fishing.

The reservoir acts like a large bath tub, holding back water from spring runoff for public recreational use during the summer and fall, and helps sustain the natural wildlife habitat. The entire reservoir is 9 kilometres long and averages a width of less than ½ kilometre.

We walked east from the main building to the reservoir shoreline and along the northeast side bridge on Highway 7 inside the protection barrier. “This bridge barrier has been recently improved for safety, allowing us to conduct this public walk to the dam”, said Vanni. Once inside, in a room not much changed since the dam’s construction, Vanni  along with a UTRCA  technician, David, explained how the dam’s four large sluice gates and three smaller valves are controlled.

Decisions on water control are made by UTRCA engineers at the main office of the Fanshaw Conservation Area dam facility. Water level measurements at the Wildwood dam are taken daily  using a large measuring tape inside an enclosed tube running down to the base of the dam. This method dates back to the dam’s original days.  A digital display readout mechanism is being installed as part of the gradual modernization of the dam’s operation.

The measurements are recorded in the logbook and results are sent to the main office for analysis.  Technicians like David are on-call to control the floodgates and valves.

Our tour included a descent down one flight of stairs to view the modern back-up generator maintained to ensure a power supply in the event of a power outage. The dam’s equipment undergoes controlled inspections to ensure its safe operation.  The next flight of stairs, to the base of the dam, was roped off. As Vanni explained, once safety improvements are made to the railings, the facility tour will continue to the lower level. “But there is no elevator, so once you go down, the only way back is up the same stairs.”

In a fibreglass enclosure visible from the bridge, we saw the covered tops of the four sluice gates, each with a display indicating the open/close position of the gate. We exited onto the north side of the dam. There we saw a crane and pulley mechanism. Vanni explained that  UTRCA technicians use this device to  install and remove  steel rod stop-logs  at the  base of the sluice gates. These logs  hold back the water, allowing for safe inspection and  maintenance of the sluice gates. 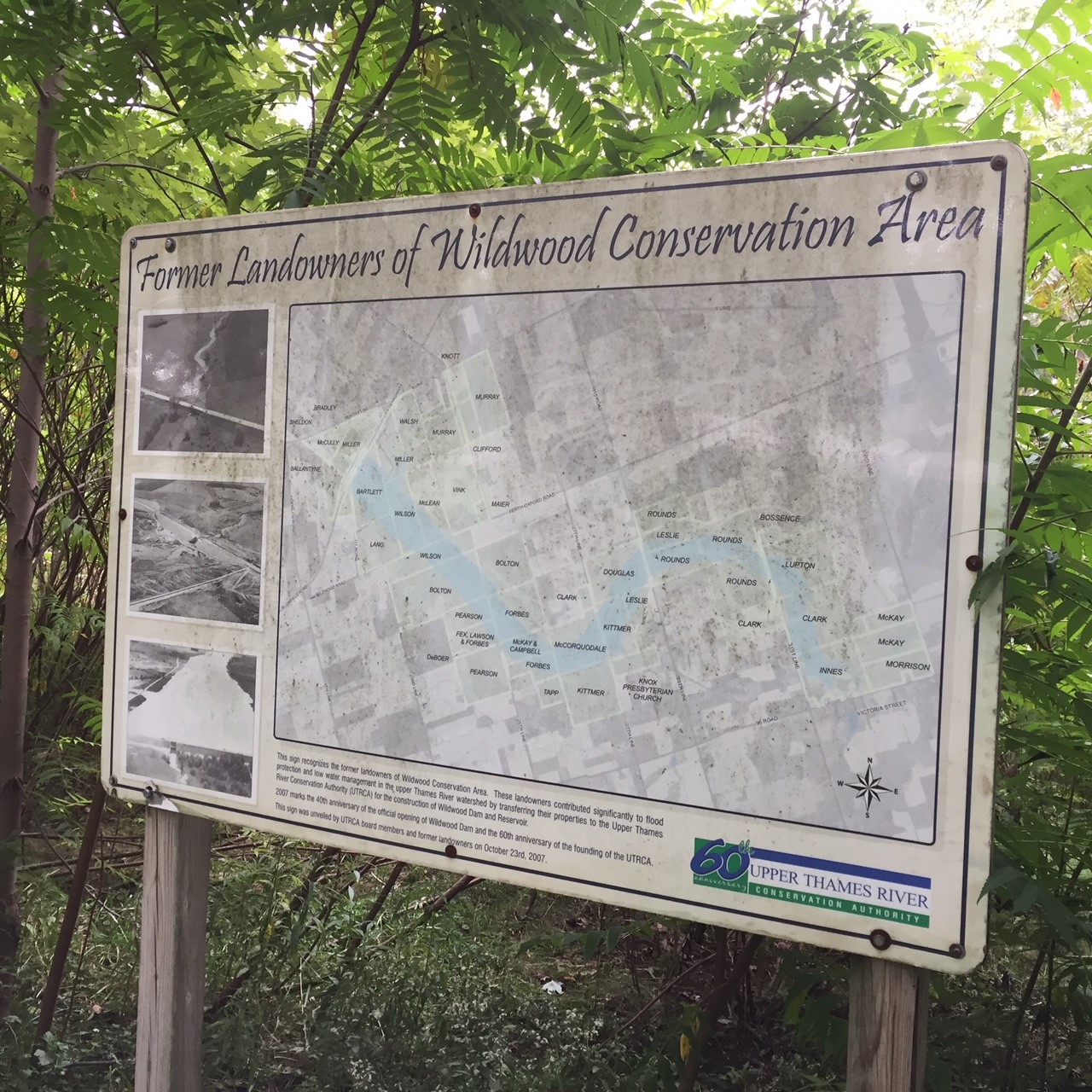 At the end of the tour, Vanni pointed out the landowners recognition storyboard that identifies the farms that existed in the area prior to the creation of the dam and reservoir.“We want visitors to know that a place as important to the community as Wildwood required sacrifice from landowners and they deserve our thanks”.