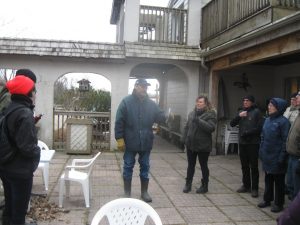 Before the Meet and Greet meeting began,  John Pries led 20 or so hikers bundled for the cold and possible muddy conditions over the grounds back of the cafe to the volley ball grass court. With the unseasonable conditions we were experiencing, John said it would be best to avoid descending to the river where the ground might be slippery.  A pair of  Osprey circled overhead as we walked.  “This is a wonderful place for birding”, said John as a male osprey, carrying a fish in its talons, cried out.  “It will sing this mating song as it follows the female through the skies” he said, “eventually alighting with its mate on its nest and presenting the food”.

John pointed out the two specific  turtle nesting areas that he had covered for protection from the winds. Turtles, both painted and snapping varieties, return each year to lay eggs above the river area in this volley ball field.  “This ritual plays out in late  May and early June without fail” based on Pries’s observations over the past 7 years.

John recalled last season carrying  some newly hatched turtles back to the river’s edge, some 60 feet away from the nesting area.  Given the predation risks not  many of the turtles will survive to adulthood and so John wanted to give these few a helping hand.  The turtles, each  the size of a loonie, when placed on the river bank, sat wondering what to do. An unseen frog watched with attention.  The frog hopped towards the group and quickly swallowed a turtle. But before John could react, the frog’s eyes bugged out and he spat out his catch. “Seems the turtle has sharp claws even that small”, said John. Slowly the turtles clambered down the bank into the river.

We walked on following John  through a wood lot overlooking the river. It is here he said that one finds a variety of birds each morning. The wind was picking up again so we headed back to the warmth of the cafe.