Skip to content
Two scientists, a Russian and a Czech, were anxious to study grizzly bears in the US. They arrived at a wildlife conservation area in Idaho one September. The rangers tried to dissuade them because the bears were mating, and ferocious and unpredictable. However the scientists had waited for this opportunity for years and were not to be deterred. The rangers finally allowed them to go into the park on the condition that they take a cell phone and report back daily.
They did so for 6 six days, but on the seventh they did not call. The rangers arrived at their campsite to discover their worst fears had been realized. The tents were in tatters and there was blood everywhere Then out of the corner of his eye, one ranger saw a female grizzly racing off into the distance. They caught up with her, shot her, and discovered she had eaten the Russian. At that moment it dawned on them that ” the Czech was in the male!”
Terry Aiken 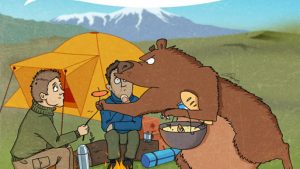