“This is the first time we have had a bridge blessed,” said Avon Trail President Jane Foster, as she opened the event. “But is not every day that the club has a 28-foot bridge constructed too”, she added.

“I am happy to be here to bless this bridge, and all people who cross over will be blessed,” he said when conducting the ceremony.
Father Nowak, from St. Agatha’s parish, participated at the bequest of Terry Aiken, who, along with other Avon Trail Board members, arranged the ceremony. Terry is the Avon Trail liaison with all landowners.

Landowners Barb and Peter Wetter, along with landowners Peter and Dagmar Schneider, were happy to cut the ribbons before all in attendance crossed over the bridge in this inauguration. Terry played tunes (German National anthem as a nod the the Schneiders, followed by the Canadian National anthem) 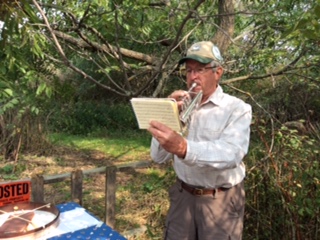 Bruce Graham, Avon Trail monitor coordinator, introduced Ted Derry as the Bamberg Bridge designer, “whose hand has touched every screw in place on the bridge.” A real collective team effort” by many volunteers is how Ted described the bridge’s development and construction. “Bridges connect, they do  not divide” Ted remarked and “that is how I feel about the Avon Trail members. We are all connected”.
Everyone then raised toasts to the bridge builders and all Avon Trail volunteers. Sumptuous desserts and fruit bags (courtesy of Valerie and Terry Aiken) were handed out and enjoyed.