ALONG THE TRAIL – Dennis Rawe

The Avon Trail Club is often invited to explore one of the many trails around Woodstock by Ross Campbell, a long-standing hiker. After the hike, we meet at Ross’s farm, an immaculately kept farm and garden. One treasure of special interest on the property is a Quince apple tree.

Cole’s Quince Apples were known in Cornish, Maine by 1806. They were mentioned in S.W. Cole’s “American Fruit Book” in 1849. His father, Captain Henry Cole had grown the apple. “Flesh when first ripe, firm, juicy, pleasant acid, and first-rate for cooking. When very mellow, remarkably tender of a mild, rich high quince flavour and aroma. When in perfection, we have never seen its superior.” (S.W. Cole).

These apples are presumably called ’Quince’ because of what several old books call its “rich, high quince flavour”, and also perhaps because of its shape and colouring. Large flattish-conical ribbed bright yellow fruit sometimes has a brownish blush. As the fruit ripens, the blush turns a glowing translucent rusty red through which numerous yellow spots appear like stars. 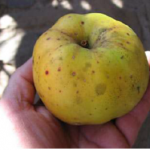 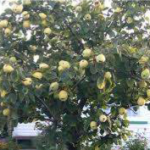