Takeaways from the 2021 Annual General Meeting of the Avon Trail on November 23:

Walking on the Confederation Trail 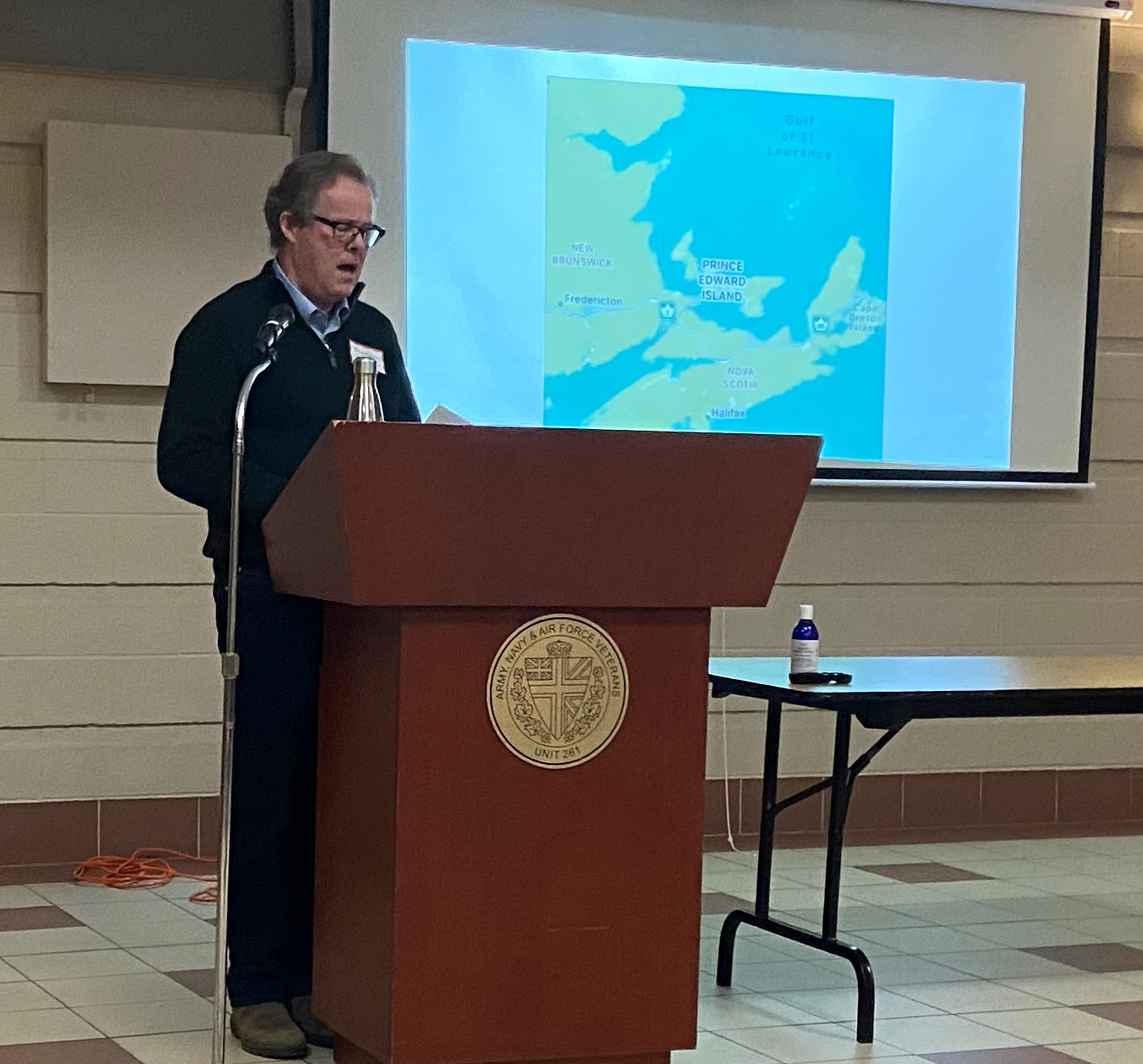 Guest speaker Bruce Graham opened our eyes to the simple pleasure of walking across Prince Edward Island. This September, Bruce embarked on a 10-day journey along the Confederation Trail, named after the decommissioned rail line on which it has been created (PEI no longer has rail transport). Bruce chose the Tip to Tip Trail section of the Confederation Trail for his adventure. It runs for 248 km from  North Cape (14 km north of  Tignish in the west) to North Lake and the East Point, north and east of Elmira at the eastern tip.

Why did he choose PEI? Well, he wanted somewhere relatively safe in these COVID conditions impacting the entire world. PEI had numbers of a cases similar to Huron-Perth – very little COVID according to his research. And it is a two-hour flight away from Toronto.

He carried his backpack with him (25-lbs full) with all his necessities. For accommodation and food, Bruce planned his stays at BnBs and motels before the adventure, ensuring there was food accessible at each resting point. The weather? Clear skies, no rain, “except for 15 minutes one day while getting to a trail section”.  Being a former railway bed,  the trail’s gradient is no more than 2 degree up or down, ideal for walking and cycling. He met cyclists on the trail and the occasional hiker. In a follow-up interview, Bruce told me he met one couple and an additional group of hikers (7)  walking the Tip to Tip distance. “At the same time, I would also encounter local dog walkers or joggers on the trail, but mostly I was alone while walking”, he said. His route took him through the communities of Summerside and Kensington, and many smaller hamlets as he worked his way south and northeast following  the Tip to Tip. “Being September, many of the seasonal businesses were running on reduced hours or closed until next summer”.  Still, for Bruce, the open businesses he came across gave support to the saying that Islanders are friendly.  In the evenings, he was asked to join in with other guests over meals at restaurants and inns.  The next time you see Bruce, ask him about this Camino-like PEI adventure.   To see the Confederation Trail map, click HERE.

This additional map gives an approximation  of the Tip to Tip start and end points of Bruce’s walk. Click HERE.

Ross grew up in the village of Hickson. He was a dairy farmer beginning in 1963 (jersey cows). Ross converted his farm to organic in 2001 (wheat, soybean, corn).
Ross and his wife Dorothy have hosted farm corn roasts for the Avon Trail over the years. They have four children.
Ross enjoys Tuesday Morning Rambles and has been a member of Avon Trail for several years.

Justin is a Chartered Accountant with Famme and Company in Stratford.
Justin is a naturalist interested in wildlife.

Dave has been a member of Avon Trail for five-plus years. Hiking is a significant leisure activity for both him and his wife, Janis. His interest in birding has increased since the start pandemic. He enjoys photography, often taking his camera when hiking.
Dave came to Stratford in 1985 as a Family Physician. He retired in 2020.  Dave has previous board experience with the SGH board and Epilepsy Ontario Huron Perth.

Paul lived and worked in Toronto for 20 years.
He moved three years ago to the rural Waterloo region. His vocational efforts now are focused on helping the public, and private landowners conserve biodiversity, primarily through the control of ecologically invasive plants.

Paul has volunteered to help with trail maintenance. As a board member, he wishes to contribute to the organization in new and valued ways and its relationship with hospitable partners.

She lives in Tavistock and has two children in Grade 1 and 2. She completed the whole trail in sections in Spring 2020 with her children. Having routes of the Avon trail close by Tavistock is an excellent escape for Martha.

Melissa grew up in Wellesley. She is raising her children there, where she operates a small-scale market garden in the village.
She hiked trail sections growing up with her family and now hikes with her husband and children. Melissa’s favourite trail sections are between Perth Line 40 and Road 107 and the stretch along Nith River between Carmel Koch and Berletts Road.

And Our Thanks To….

To view the minutes from this meeting, click HERE.

WITH THANKS TO SPCF

The Avon Trail Board is pleased to announce that Avon Trail is the recipient of a $1,000.00 grant provided by the Stratford Perth Community Foundation.  This grant was released in May, 2021 and is supported through the Annie & Isabelle Chesterfield Fund and the Donald McTavish Conservation Fund,  held within the Stratford Perth Community Foundation. (more…)

This is a reminder to users of the Avon Trail. Please be aware of certain trail section restrictions. The Trails are on private land. Our access to it depends on the good will of the landowners. NO WALKING AND NO HIKING allowed on ORGANIC LOOP from NOV 30 TO APRIL 15. PLEASE, respect the landowner’s (more…)