Having hiked the trails recently through May and June, I heard and then spotted this small song bird. Dennis and Steve’s article from 2017 is a reminder of the small pleasures song birds can bring when on the trail.  Tom Kimber Newsletter editor 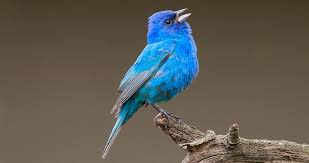 By Dennis Rawe and Steve Thorpe

The Indigo Bunting is a small sparrow-sized songbird that is a common summer resident in our area. The male is a spectacular solid blue while the female is mostly brown. They
like shrubby areas, brushy woodland edges, hydro right-of-ways and weedy fields. Male Indigo Buntings sing loudly from the top of a shrub, telephone pole, or the tallest perch in the area. Their song is loud and bouncy with paired notes that are a bit like a goldfinch but more strident. One mnemonic is “fire; fire; where? where? here; here; see it? see it?

With their short but thick conical bill they can eat both animal and vegetable matter. On their wintering grounds in Mexico and Central America they eat seeds and some berries. During the breeding season here they change to high protein food and give insects and spiders to their young. The female builds the nest which contain 3 – 4 eggs and is usually located in a dense shrub less than a metre above the ground.

Like Blue Jays and other blue birds, Indigo Buntings have no blue pigment. Their colour comes from microscopic structures in their feathers that refract and reflect light. In a similar way small particles in the air scatter sunlight to make the sky look blue.

Using eBird, a widely-used online database of bird observations, Indigo Buntings are regularly seen along the entire Avon Trail route. Look for Indigo Buntings in appropriate habitat from May to September.