Volunteerism is the heart of the Avon Trail. Dick and Jane Pullin are the essence of what it means to be readily available volunteers.
When you’ve been involved with the Avon Trail for as long as Dick and Jane, you adapt with the times and changing needs of the club. That’s been the story of Dick & Jane’s participation with the Avon Trail.
Dick and Jane, residents of Waterloo, have been active members of the Avon Trail for over 20 years.
They have led many hikes – several in one of their favourite areas – the Mono Cliffs of the Bruce Trail. One particular hike left a lasting impression. Halfway along the hike, Dick stopped the group for a lunch break and setting down his pack, carefully unwrapped wine glasses and two bottles of red wine, enough for all the participants!
Another of Dick’s favourites was to hike from Waterloo to St. Jacob’s and then get aboard the heritage steam engine back to Waterloo at the end of the day.
There were many hikes in his favourite stomping grounds, the Schneider/Musselman woods, where Dick and Jane have acted as trail monitors for many years, and also have acted as the liaison with Jane Schneider, one of our generous landowners.
Jane and Dick took the lead in applying for a successful Trillium Fund Grant, which entails a significant amount of work. The proceeds from that grant funded a new Trail Guide. They were also involved in raising the funds that underwrote the cost of the significant signs posted at all access points along the Avon Trail.
Jane took on being editor of the Newsletter for several years.
Most recently, when we were looking for a tool depot at the east end of the trail, once again, Dick and Jane stepped up and offered their garage space for our equipment. This offer has been helpful as we look to increase the presence of the Avon Trail in the Waterloo area.
Perhaps the most significant contribution Dick and Jane have made has been their tireless representation of the Avon Trail at the east end of the trail. There have been many discussions about re-routing the path off busy Woolwich Township and City of Waterloo roads. Dick has always been ready to arrange and attend meetings with municipal officials as we continue to seek improvements.
It’s a great pleasure to recognize and honour Dick and Jane for their spirit of volunteerism and the many years of service to the Avon Trail. Congratulations! 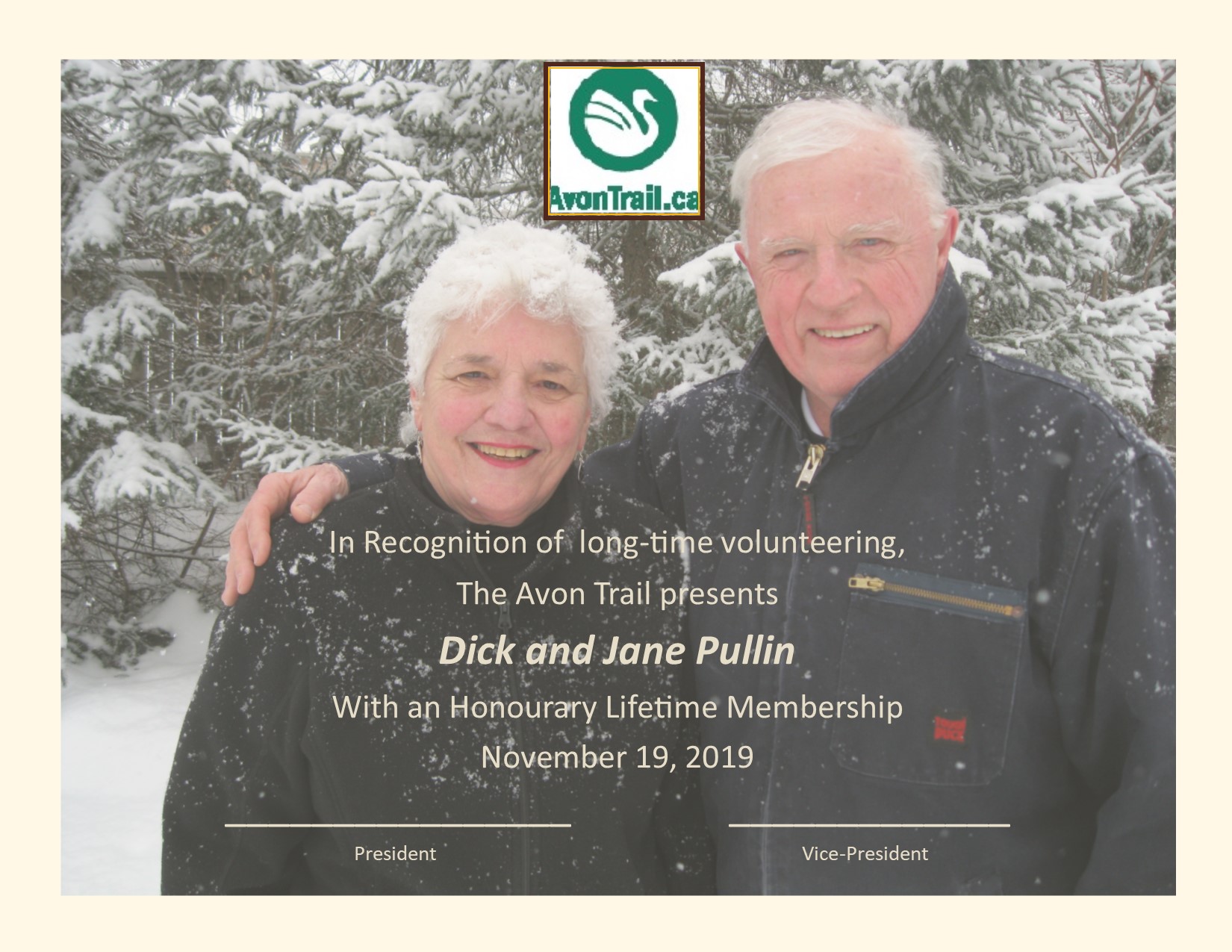