On May’s 1st Sunday, with sunny skies and a warming temperature, my wife Valerie and daughter Carolyn and I decided to walk the Nith side trail section. Leaving the car parked at the Carmel-Koch end (km 80.1), we watched as five cyclists emerged from the trail. They drove past heading east. Overnight I reflected on this. Perhaps they had landowner permission (unlikely).
It must have been pretty evident that the trail did not suit cycle traffic. Imagine having to lug a bike over stiles. But how much damage could they do? They were not the large tire bikes, and, unless it was wet, I doubt they would do much damage with one exception. If they rode their bikes over the pipe at the Khaki Club campgrounds (km 75), they could damage it. On the plus side, usage of the trail, even by bikes, does reduce the amount of maintenance we have to do(e.g. less grass cutting). I am kidding. We do not want bikes on the trails.
What would you have done? Gently advise the riders that the trail was for hiking and not for bikes?

We then drove to the Khaki Club parking lot in Carolyn’s car. It seems that the west side of it is only for horses and buggies, so we parked on the other side. As we were about to enter the bush, two large friendly labradors greeted us with great abundance. The dogs belong to campers. Perhaps we need to divert the trail west of the picnic pavilion to get further away from the campers. Valerie got quite wet from one of the dogs, which had been swimming somewhere. Going west of the pavilion would also forever get rid of having to step over that pipe alluded to earlier. 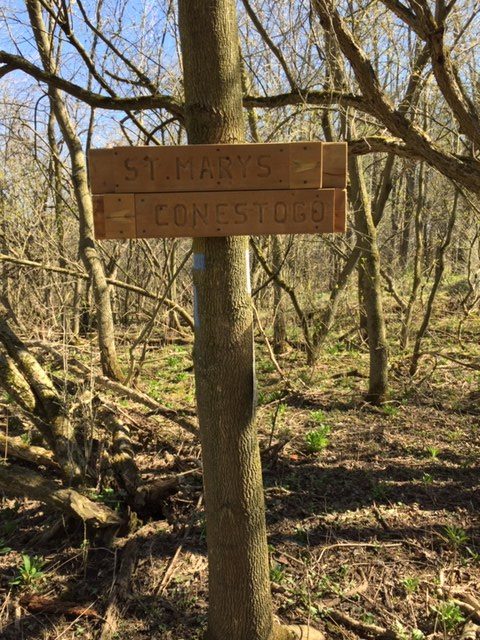 As we got nearer the river, we noticed an elegantly carved sign pointing to St Mary’s one way and Conestogo the other. A nice touch by Ted. We caught up with a couple of Waterloo girls whom we had seen on the edge of the field, and they were coming back along the West Nith track. They seemed confused. They were navigating using the Ontario Trails app on the phone. The app was clearly out of date. It did not show the west Nith side of the trail at all. The east Nith side, which has been closed out, still displayed on the Ont Trails app. We were able to correct them on this, and they turned around and headed south ahead of us.
Valerie and Carolyn were tremendously impressed by this section. They took photographs.
We saw a couple of butterflies and many flowers known as Dutchman’s Breeches. I had seen them once before on the east side of the Nith River. The flower is white and slightly yellow on the bottom, and hang from the plant like puffy pants.
The remainder of our trek was uneventful. As we drove off, the cyclists passed us again, and in the distance, we saw them heading into the East Nith section!
We did tell the two lost Waterloo girls to check out the Avon Trail app.